Jerry Bock of Fiddler fame in PBS  "Broadway Musicals: A Jewish Legacy" and  Blessings of Beauty 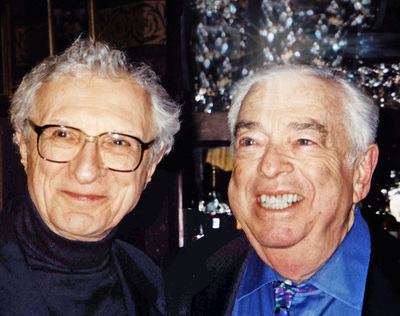 When in 1998 I told composer Jerry Bock that his song, In My Own Lifetime, from his final collaboration with long-time lyricist Sheldon Harnick of the Broadway musical masterwork The Rothschilds would be included in my 1999 Blessings of Beauty CD with flutist Amy Ziegelbaum, he was so thrilled, that he sent me a copy of his handwritten manuscript which Amy and I used for the recording.

An uplifting musical, The Rothschilds chronicles the humble beginnings, determination and genius of what became a history-influencing internationally distinguished Jewish family.

In My Own Lifetime is one of the instrument song settings on Blessings of Beauty: A Classic Collection of Judaic Gems featuring a wide-ranging assemblage of renowned composers including Kurt Weill, Salamone Rossi, Morton Gould, Billy Joel and David Amram. Jerry Bock’s In My Own Lifetime magnificent score was one of several tracks from Blessings of Beauty used in the soundtrack for the 2007 Emmy Award-winning documentary A Hidden Life that aired on PBS.

Just re-released in 2013 with new cover and art design by Karen Leon, Blessings of Beauty is celebrating its 14th year of transporting listeners on an exquisite journey of Jewish music –old and new.