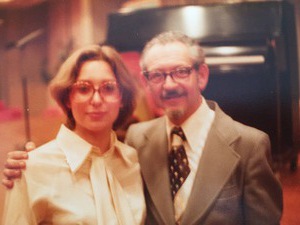 Yesterday, Sunday, May 31st, I had the opportunity to perform four stunning Richard Neumann Ladino song settings with noted mezzo-soprano Donna Breitzer-in honor of the centenary of his birth as part of the American Society’s for Jewish Music annual Music In Our Time concert.

Richard Neumann was a versatile composer, conductor, arranger and educator. Born in Vienna in 1915, he escaped Prague in 1937 with his wife Anci and came to New York. A mentor to many, he was energetic and dedicated, generously giving repertoire (others, as well as his to musicians to perform and teach), resources, opportunities and encouragement.

He was passionate about Ladino folksongs, devoting a great deal of time setting many, bringing them forward beyond the Sephardic community. He collaborated as arranger with the renowned operatic tenor and interpreter of Ladino songs, Nico Castel, producing the popular Nico Castel Ladino Songbook, published by Tara Publications.


First introduced in 1975 while a senior at Queens College’s Aaron Copland School of Music, I was privileged to premiere Richard’s Three Piano Preludes and perform seven of his Ladino settings with Cantor Helene Repps at the American Society for Jewish Music’s March 7, 1976 concert at the 92nd St Y’s Buttenweiser Hall.

I worked alongside him for many wonderful collaborations including the Cantors Concert Ensemble and the Queens College Yiddish Chorus, considered a weekly course “happening,” including on and off campus performances.

Richard loved settings songs: liturgical, chant and folksongs-be it Israeli, Chassidic, American (he loved Carl Sandburg and Walt Whitman), Yiddish, Ladino and Sephardic. He understood how each song told a story, simply embraced by a melody. He set them with sensitivity, insight and inspiration.