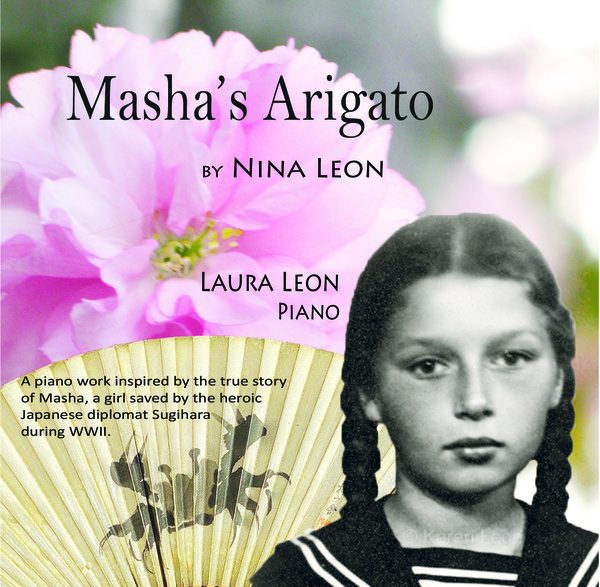 Masha's Arigato (Masha's Thank You) is a new solo piano work inspired by the true story of Masha--a girl saved by the heroic WWII Japanese diplomat Chiune Sugihara who was posted in Kaunus, Lithuania in 1940. It was composed as a tribute to my late mother Masha Leon from her three daughters, and as an expression of gratitude to Sugihara and the people of Japan.

Chiune Sugihara issued 2,139 life-saving transit visas to Japan, saving 6,000 Jews--which he issued against his government's directive. My mother and grandmother were among them, all of whom arrived by boat from Vladivostok to the Port City of Tsuruga, Japan, where they were welcomed. My mother and grandmother then lived in Kobe, Japan for 6 months.


Masha's Arigato honors her beloved Yiddish culture and cherished time in Japan, interweaving her favorite folk song A Kleyn Meydele (A Little Girl) with Sakura, the traditional Japanese folk song that celebrates the beauty of cherry blossoms in springtime.

Masha's Arigato was premiered on November 3, 2020 during the reopening ceremony of the Port of Humanity Tsuruga Museum. The Museum, which opened in 2008, is dedicated to telling the story of Chiune Sugihara and the refugees who arrived during WWII. During the reopening ceremony, Ms. Nobue Doda performed its premiere on behalf of Masha's family and for all those in attendance.