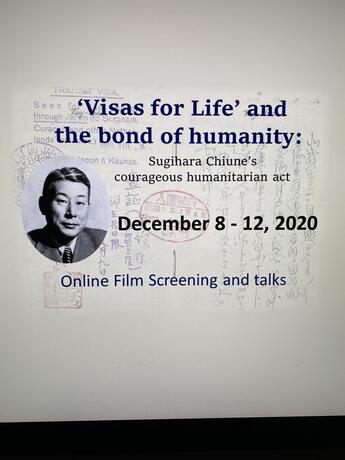 The Embassy of Japan in Canada hosted an international online event "'Visas for Life' and the bond of humanity": Sugihara Chiune's courageous humanitarian act from December 8-12, 2020. It honored the 120th anniversary of the heroic WWII Japanese diplomat Chiune Sugihara's birth and the 80th anniversary of his courageous issuing of 2,139 transit visas while posted in Kaunus, Lithuania in 1940, saving the lives of 6,000 Jews.
The opening webinar ceremony was introduced by host Ambassador Yasuhisa Kawamura of the Embassy of Japan in Canada.
It was an honor to have been invited to participate alongside international Embassy dignitaries and important Canadian organizations, introducing and presenting four piano works that expressed hope for peace in the world. One of the four-all from several of my recordings-was the premiere broadcast of the November 2020 release of the CD Masha's Arigato, a new solo piano work composed in honor of Sugihara and the people of Japan.

Masha's Arigato received its premiere performance during the reopening ceremony of the Port of Humanity Tsuruga Museum in Tusurga, Japan on November 3, 2020-the very port to which all of the Sugihara life-saving visa recipients arrived.